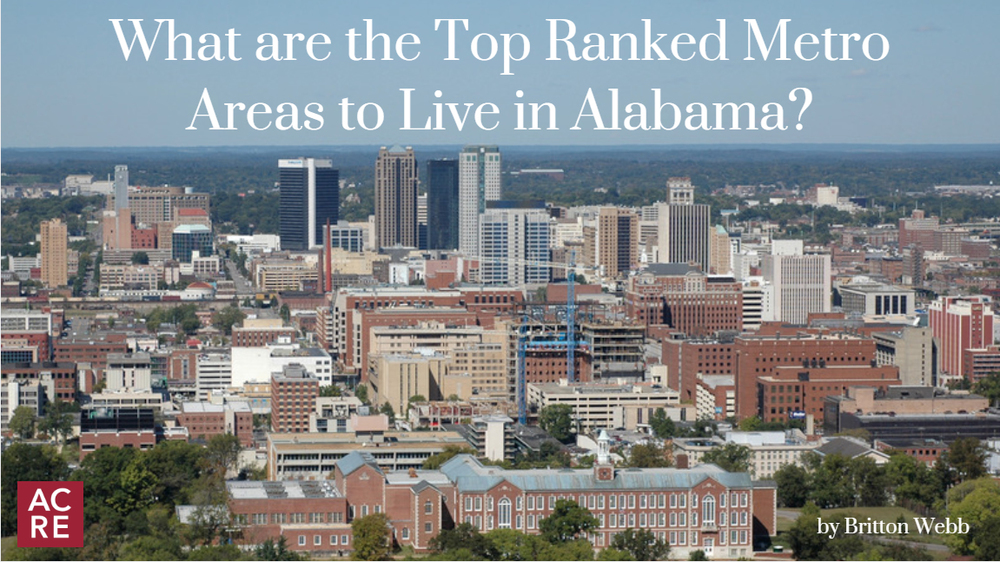 What are the Top Ranked Metro Areas to Live in Alabama?

When looking for a place to live there are many factors that go into this major decision. Some elements are based on individual preference; others are broadly desired by most people.  We’ve ranked the top MSA markets in Alabama based on 5 key determinants. These include: median family income, Alabama Housing Affordability Index, average school score, violent crimes per 100,000 residents, and effective property tax rates. As a result of these metrics we were able to derive weighted and unweighted rankings for the state. On our weighted rankings, we applied the largest weights of 30 percent to median family income and the average school score. The Alabama Housing Affordability Index which is the ratio of the median family income for Alabama to the income required to purchase the median priced home for the state; this carried a 20 percent weight in our research. Violent crimes per 100,000 residents received a 15 percent weight. Lastly, property taxes in Alabama are significantly lower than the national average, so this metric carries the lowest weight in the rankings.

Along with the median family income, the average school score also carries the largest weight. In first place again is Huntsville with an average district school score of 83.8. Within this district Madison City schools received the highest score of 95, and Huntsville City with the lowest of 75.

For second place in the average school score rankings there is a tie between Daphne- Foley- Fairhope and Decatur, with a score of 82. Baldwin County schools received the highest score of 82 in Daphne-Foley-Fairhope, and Hartselle City Schools received the top score of 91 in the Decatur MSA. Coming in at a very close #4 is Auburn-Opelika with a score of 81.67, and Auburn City schools obtaining the top score of 89. Arriving at #5 with an average score of 81.13, is the Birmingham-Hoover MSA. Despite the ranking, the Birmingham-Hoover MSA has the largest concentration of A rated school districts in the state. The highest overall ranked school district, Mountain Brook City schools with a score of 98, is found in the Birmingham metro area.

The next element researched for our rankings is the rate of violent crimes per 100,000 residents. Based on the FBI crime reporting program these offenses involve force or the threat of force. The top 5 rankings for lowest number of violent crimes are as follows: Decatur (192), Daphne-Foley-Fairhope (217), Auburn-Opelika (275), Birmingham-Hoover (325), Dothan (353). All of these areas fall below the national average of 394. However, the number of violent crimes per 100,000 for the state of Alabama (524) is higher than the national average (394).

The following tables demonstrate the complete weighted and unweighted rankings for the state. For further information about the methodology for these rankings click here. 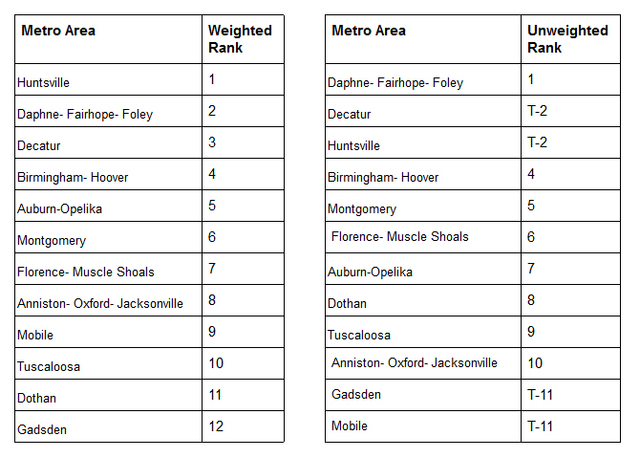