Since last week’s WIN and review of the economic news that was led by the best Q1 GDP (+3.2%) in more than a decade - with a growth rate more indicative of a Q3 period -  I have declared this economy as being in the “Boom & Vroom” phase – that’s a KC-nomics term not found in the academic economic text books.  Typically, we see these kinds of economic results 3-5 years into a recovery, not approximately 10 years into a cycle.  So what does a “Boom & Vroom” economy look like?  I answered this question as follows in a slide for presentations this coming week to CCIM, ACRE Board of Trustees and BOMA:

Let me explain. A “Boom & Vroom” economy is not defined by just a few metrics, or a single quarter of >3.0 percent GDP; rather, it is defined by a combination of metrics all registering simultaneously in the “Hyper” quadrant of an economic cycle. It is an economy where, for example,

iii. Small Business Optimism is at levels not seen since the President Reagan era;

iv. Consumer Spending is occurring at nearly a 1.0 percent level (+0.9% in April) in a month that does not involve a major holiday or spending period event like Christmas or Back-to-School; and finally,

v. Commercial real estate prices are still rising at a 3.0 percent level after years of recovery and increases from the “Great Recession.”

That picture is what the above graphic  conveys.  In other words, these are the kind of interconnected metrics that define a “Boom & Vroom” economy – and we finally have one! It is also what is compelling President Trump to play the 25 percent tariffs card on China at this time. It’s high-stakes poker, but economic clout is what a strong economy provides Trump in trade negotiations.

With that backdrop, let’s review KC’s Top 5 items for this week’s WIN.

Last Friday’s May BLS jobs report for the April period was 70k above expectations at 263,000. The +263k figure should not have been a surprise as the +3.2% Advanced Estimate for Q1 GDP, and  ADP’s Private Payrolls report that preceded the BLS,  both suggested job growth was still quite healthy.  And the May BLS report once again validated KC’s “BLS-L=BS” formula with the revisions for prior months job tallies. The skeptical +30,000 figure for February 2019 has now been revised  100% by the BLS. Now the FED has to decide: i) what data to be dependent upon with such BLS revisions; and ii) Monetary Policy for an economy more vibrant than 2018 when the FED hiked rates 4 times. Fortunately, Fed Chair Jerome Powell has two new voting FOMC voting members that know the tool to use now to side step “Nightmare on Fed Rate Hike Street.”  More on that in a moment, but the hint is IOER.

The +275,000 figure is not the important item to note. The revelation that Small and Medium-sized businesses (those with less than 500 employees) are still the backbone of this economic recovery is the key point. Large companies (those with >500 employees) accounted for just 53,000 of the 275,000 private jobs in April.  What a difference deregulation and a tax cut makes for small business growth! And for our commercial real estate industry, this news is most welcome because companies with less than 500 employees account for more than 60 percent of all commercial real estate transactions (leasing and purchase). Wait and see what happens when the final, final, final Opportunity Zones rules are clarified and set in stone tablet this Fall. 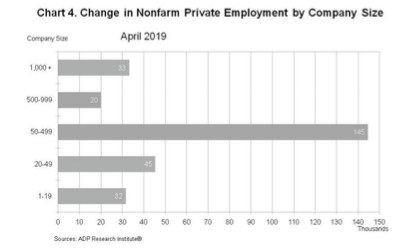 #3 – Federal Reserve’s April FOMC meeting and “No Rate Change” Decision.  The no rate change was about as expected as the sun rising or a daily Tweet from President Trump.  What wasn’t expected was Chairman Powell dusting off a legacy monetary tool and injecting it into his press conference.That tool is IOER and stands for Interest-On-Excess-Reserves. It is a powerful monetary tool that St. Louis Fed President Jim Bullard had placed in the Chairman’s Christmas Stocking after the December rate hike.  IOER is a way for the Fed to either inject or extract capital into the economy with rate hikes or cuts.  By raising the interest rate the Fed pays on the excess reserves a bank holds – like due to Dodd Frank and the post Financial Crisis more onerous Tier I Capital requirements linked to the annual bank stress tests (DFAST and CCAR) – it discourages banks from lending and extracts capital from the economy without a rate increase.  And to stimulate the economy, the Fed merely lowers the IOER rate which encourages banks to lend to earn a better ROA versus holding the capital as excess reserves. Now the Fed Chair can use IOER to slow down the economy later this year without a rate hike and repeat of December.  Thank you St, Louis Fed President Jim Bullard. If only you were a voting FOMC member in 2018 your counsel on Yield Curve inversion and IOER would have saved us from the worst December stock market in U.S. history.

#4 – Construction Costs. We received more evidence this past week as to how severe rising construction costs are – especially in California and along the West coast – via a new report by Rider, Levett & Bucknall. This latest Quarterly Construction Costs Report  shows the U.S. national average increase in construction costs was roughly 5.73% last year. The report showed that California ranks worst as the state with the highest construction costs. At an MSA level, the markets that showed the greatest annual cost escalations included Chicago (7.61%), Portland (7.13%), San Francisco (6.73%), Phoenix (6.70%), Washington D.C. (6.51%), and Seattle (6.48%).

Bankers beware and start stress testing your construction loans as you may find the LTV (Loan-to-Value) on your construction loans made the past 1-2 years will be at or above 100% at completion. Rents and NOI are not growing near the pace of rising construction costs. And if you are a developer, it will cost you more to build in CA - and take longer and involve more hoops with more onerous building codes and requirements. Aren’t those of us in the South and KC’s defined “Golden Triangle” grateful NOT to live in a state whose state symbol is a Bear?

#5 – The good bad & ugly in ports news: With the passage of the Rebuild Alabama legislation to invest in Alabama’s Logistics Infrastructure – with first funding going to the Port of Mobile – Alabama now appreciates the state-wide economic benefits from a deep-water port with excellent Class I rail road connectivity.  Therefore, it is critical Alabama and other Gulf and East coast port states pay attention to what is happening in Logistics and ports.

The good news of last week was that the Inland port model is expanding.  New York is the latest state to connect the dots and announce plans for a new Inland Port in upstate NY to provide container handling relief to the NY/NJ Port authorities.

Port of Long Beach Container Terminal Sale Additional news as to the value of ports was the announced sale of the Long Beach Container terminal in Southern California for $1.8 billion. The seller is guaranteeing the buyer $9.0 billion in revenue from the terminal over the next several years.  Now how can that transaction and revenue guarantee be anything but good for those investing in their port assets.  Here is a rare and fresh comparable as to the value of ports and the container terminal capability being built at Port of Mobile in collaboration with Wal-Mart?

The Bad & Ugly port news is – believe it or not – proposed legislation at the Port of Houston to limit Post-Panamax Container Vessel traffic. Existing bulk-cargo energy and chemical cargo shippers are crying foul over the Port’s Container growth. It is a NIMBY reaction to new and encroaching large PPPMX container vessel traffic.  The lead story in the Journal of Commerce as of the writing of this WIN was:

” Opponents of two proposed laws that would limit calls of vessels larger than 9,500 TEU to one weekly are urging shippers to fight the legislation and tell lawmakers that the bills will disrupt the supply chain and slow cargo.”

Who would have thought that in Texas – of all pro-growth and “bigger is better” states – that legislation would be circulating to retard growth at the port of Houston.  There is a logical and nearby solution.  It is known as Port Freeport. It is the is the other rising Gulf Port story in addition to Port of Mobile.  Texas, look at what you have with Port Freeport and connect the 3 Class 1 Railroads to Rosenberg and have a win-win solution.

That’s it for this week. Earnings continue with retailers up next. With strong consumer spending and a healthy jobs market, I expect more Q4-type upside earnings results from the Wal-Marts, Targets and Home Improvement Center Retailers. Keep in focus that approximately 60 percent of all S&P 500 companies that have reported earning thus far in Q1 have beat on top-line revenues. Stand out stars include P&G with +4% Organic Sales growth, Coca Cola with no FOREX or currency exchange excuses, Caterpillar which is making lemonade out of weak Asian heavy equipment sales for construction activity  by pivoting to booming mining equipment demand in the U.S. shale regions.  Enjoy this time. It is as good at we see every 10-20 years.

Feel comfortable planning a Summer vacation and go hire a newly minted college graduate.  You know you need the labor and they don’t want to move back home with mom and dad. Finally, ACRE and CCIM are busy on our next research paper that will “Re-tell the Retail Story.” I promise this paper is not about more store closings or experiential retail. What is occurring in retail is a disruptive but positive story that has many new dimensions to it ranging from the growth and implications of “Scan-and-Go” to how grocery will tackle on-line ordering. Retail is the new opportunity asset play.

6 Keys To Empowering Your Team

The New Mall Tenant Is Your Office

REITs Urged to Use Caution in Picking Opportunity Zone Locations

Philly's MLS Team Looks To Create Its Own Stadium-Anchored, Mixed-Use Community In Chester

Is Florida Running Out Of Mitigation Sites?

How to Fight Inflation Through Real Estate Investing

'We Are In Hot Pursuit': Rockefeller Group Looks To Pour More Money Into D.C. Real Estate

‘Elevating Consciousness’ with an IPO: Positives & Negatives for WeWork

Airbnb to Collaborate on NYC Hotel

Private Payrolls Surge by 275,000 in April, Blowing Past Estimates in Biggest Gain Since July

'Keep On Keepin' On': Economists React To April Jobs Report On Twitter