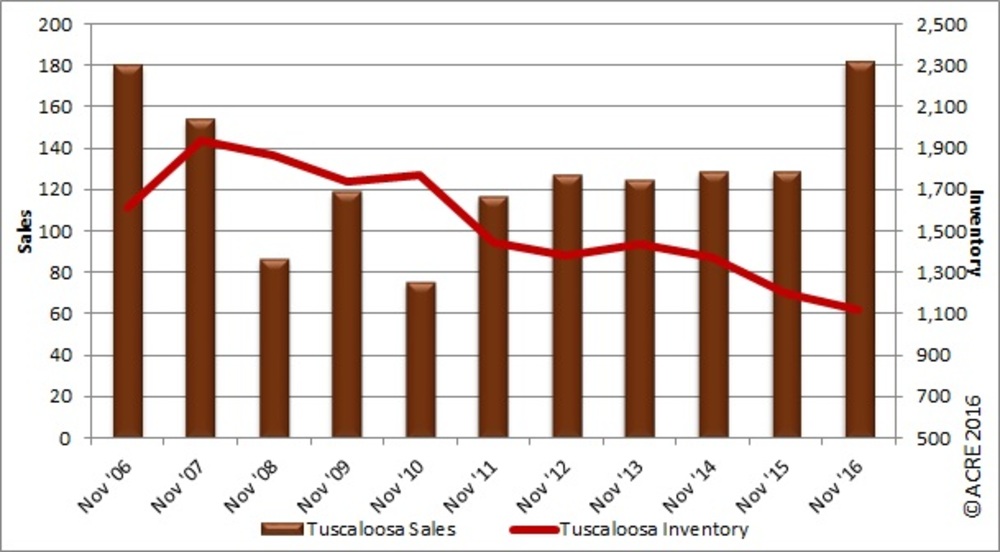 Tuscaloosa enjoyed 181 home sales during the month of November.

How do Tuscaloosa's home sales in November compare to the past?

Tuscaloosa home sales rose by 6.5 percent over October's pace of 170.

According to the latest data obtained by the Alabama Center for Real Estate from the Tuscaloosa Association of Realtors, there were 181 homes sold during the month of November, which eclipses the November 2006 peak (180).

While historical data indicates a typical decrease of 10.4 percent when it comes to Tuscaloosa home sales when comparing November to October (2011-15), Tuscaloosa's market held steady as the year inches closer to the winter months.

Here's a look at how Tuscaloosa has performed during November since 2011.

2011: During November 2011, there were 116 homes sold in Tuscaloosa County. It is important to note that this was months after Tuscaloosa experienced the April 27, 2011 tornado outbreak.

2016: Last month, Tuscaloosa experienced a 41.4 percent risei n home sales when compared to the previous November. The 181 homes sold last month were 45 percent higher than the five-year average of 125.