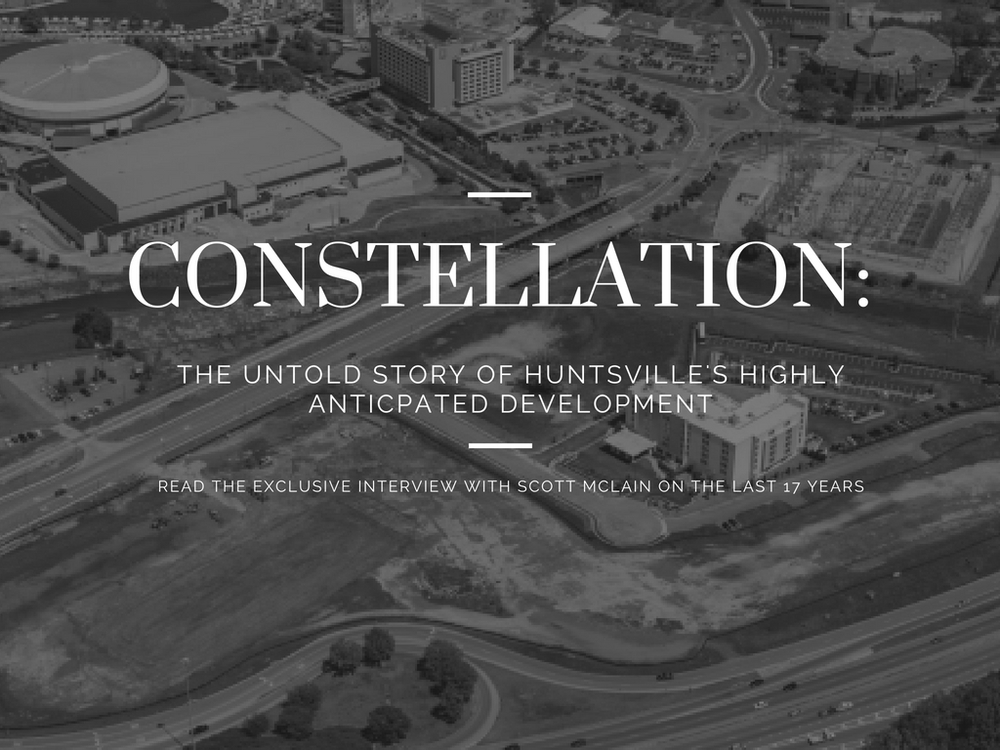 Over the past seventeen years, developers and Huntsvillians have watched the boiling pot that is Constellation. The over 11 - acre tract of land located between downtown Huntsville and Memorial Parkway will be transformed into a 1,032,458 square foot mixed-use development that will include apartments, retail, hotels, and office space. The development known as Constellation will take on a grander, more diffused focus than traditional developments.

The late Gene McLain, former politician and commercial developer, purchased the plot in 1961, tearing down the old Heart of Huntsville Mall with the idea to create an ambitious, landmark development that would create connectivity within downtown Huntsville and the surrounding areas. Unfortunately, McLain passed in 2001 before he could construct the cutting-edge project.

“My father passed at 7:00 a.m. one day and we were scheduled to meet with (former) Mayor Loretta Spencer at 8:00 a.m. to start planning,” said McLain.

His son, local commercial real estate broker and former attorney,  D. Scott McLain, inherited the patriarch’s plot and also his commitment to the community. He made a promise to see his father’s vision through, and has spent the past seventeen years working towards it.

McLain much like his father was a curious visionary and stalwart of innovation, and he knew the land called for much more than a retail strip center or a Super Walmart. “The land is the gateway to downtown Huntsville that provides an opportunity to bring a mixed-use project worthy and inspiring of Huntsville,” said McLain.

He is insistent that the highly anticipated mixed-use development will take creativity to new lengths.“There are two ways to learn creativity. One is to read about it and the other is to travel,” said McLain. An avid traveler, McLain visited and studied over 80 international developments. He spent a tremendous amount of time identifying and investigating common elements in the prolific developments he toured.

Another large component serving in his bullish inspiration was real estate's “return to mixed-use.” From 1960 through the late 1990’s, developers built massive big-box retail strip centers and malls amidst American suburbia, but in the early 2000’s a great transition began to take place. As big name retailers like Blockbuster began to close their doors, millennials started moving downtown, and people started craving a more complete experience. Developers began returning to mixed-use developments similar to the ones built in the early 1900’s. Live, work, play became the mantra for experiential space. “People want to walk out of their office and go to lunch, and maybe stop and purchase a unique gift," said McLain.

McLain wants to combine the elements from his pensive studies with Huntsville’s homegrown spirit, playing to the city’s strengths and proud history like Redstone Arsenal and NASA. The first order of business was the development’s name “Constellation” that was conceived after a slew of ideas. “We wanted to incorporate Huntsville’s treasured history in the Space Race and NASA development, but we also sought out to have a modern and ‘cool’ name, rather than the a title with the typical “Rocket City” plug.

But for years, the dirt remained unmoved. Why?

There were several factors preventing the project from developing faster. Like many, McLain suffered the dramatic consequences of of the 2008 financial crisis. “Prior to 2008, I had someone asking at least twice a month to buy the property. 2008 hit everyone, especially developers. From 2008 to about 2015, banks weren’t lending to anyone,” said McLain. Strict policies were enforced and incentives became extinct, making real estate projects of this stature nearly impossible. But capital wasn’t the only issue, McLain experienced an arduous partnership process. After the death of two partners and the abandonment of two more, McLain struggled to keep consistency and pressing  the reset button on multiple occasions.

During this time, McLain never lost sight of the vision himself and continued working diligently on the blueprints and design of the project with a multitude of architects, interior designers, and engineers.

The Location and Design:

McLain’s design and development is far more complex than a drug store on a corner. His plans feature a mountain of moving parts and bizarrely, beautiful elements that will make the site a landmark destination for both locals and tourists. Nestled between downtown Huntsville, Memorial Parkway, and I-565, McLain’s site has the largest traffic count in of any other location in the Huntsville metro area. Its prime location pushed McLain and his team to create a repository that would meet business, entertainment, and residential tenants and visitors. 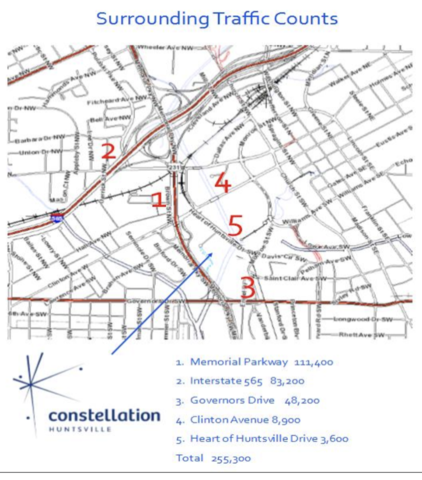 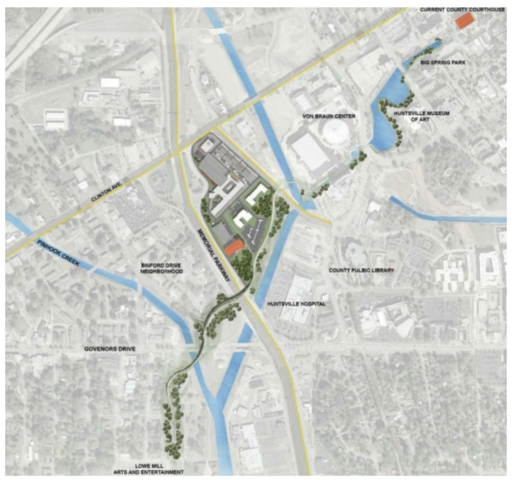 “The City of Huntsville is planning a pedestrian-friendly skybridge that will connect downtown Huntsville, Memorial Parkway, and Governors Drive, allowing people to safely and conveniently walk, run, and ride bikes between Huntsville’s most trafficked areas. This development will serve as hub activity alongside anchor destinations such as Lowe Mill, downtown Huntsville, and the Von Braun Center,” said McLain.

His architecture will incorporate 222 apartment units, 71,852 square feet of restaurant and retail space, 347,742 square feet of small and large office space, two parking decks, and two hotels. Apartments in the development will range from $1,000 to $1,700 a unit and will be designed with modern touches by an Atlanta design group that specializes in luxury apartments. McLain also notes that he has paid close attention to the acoustics and engineering of the apartment structure because it’s proximity to Memorial Parkway. “We want residents to be happy, and we have worked with several engineers in the design to ensure that traffic won’t disturb our residents,” said McLain. When it comes to restaurants and retail, McLain plans to recruit interesting, new-to-market restaurants with a majority new to the state of Alabama. He has not announced any specific names but assures that it will be exciting. “It just won’t be a Cheesecake Factory,” said McLain.  The development is set to feature only one anchor, destination retail store. He is passionate about parking. “The biggest hurdle in any real estate development is parking. The appropriate ratio of parking to destination is important and does not come without cost. Most people do not understand parking decks. One parking space in a parking deck costs approximately $18,000 and building decks takes careful partnership between private and public entities. “We will have 680 parking spaces to accommodate our tenants and visitors. You can do the math,” said McLain. The two hotels in the development will be moderately priced along the lines of a three-star Hilton. 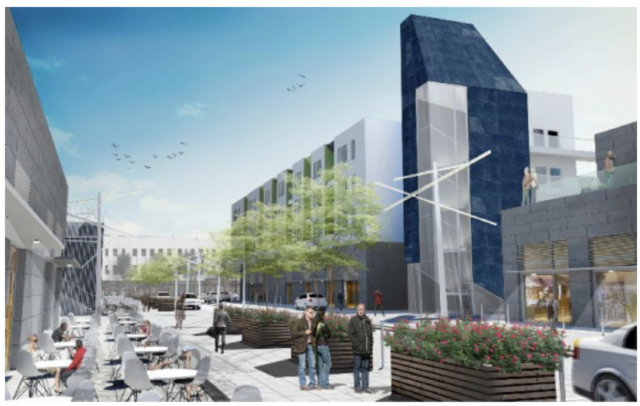 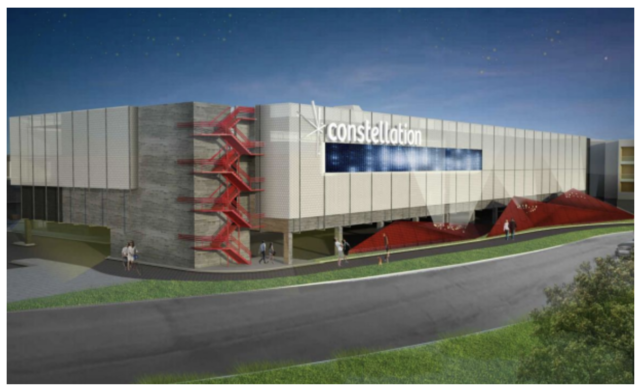 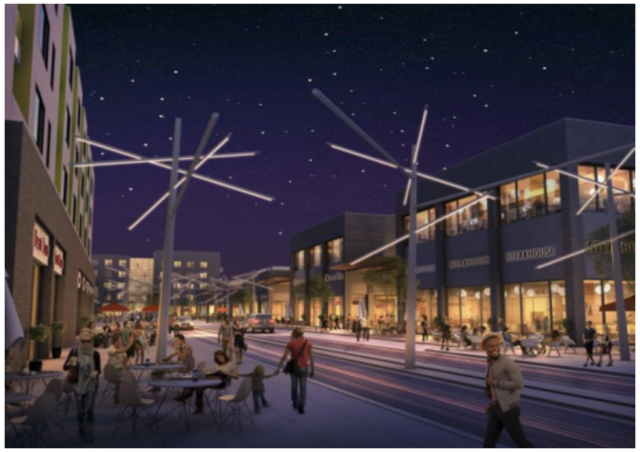 11 architects and 4 partners later McLain and renowned, Chicago-based development company, Equibase Capital LLC, broke ground on the development in October of 2017, putting facetious observers and conversations to rest. McLain projects the walls of the first buildings to be constructed late this year. Once completed, the project will be one of the largest mixed-use developments in the region.