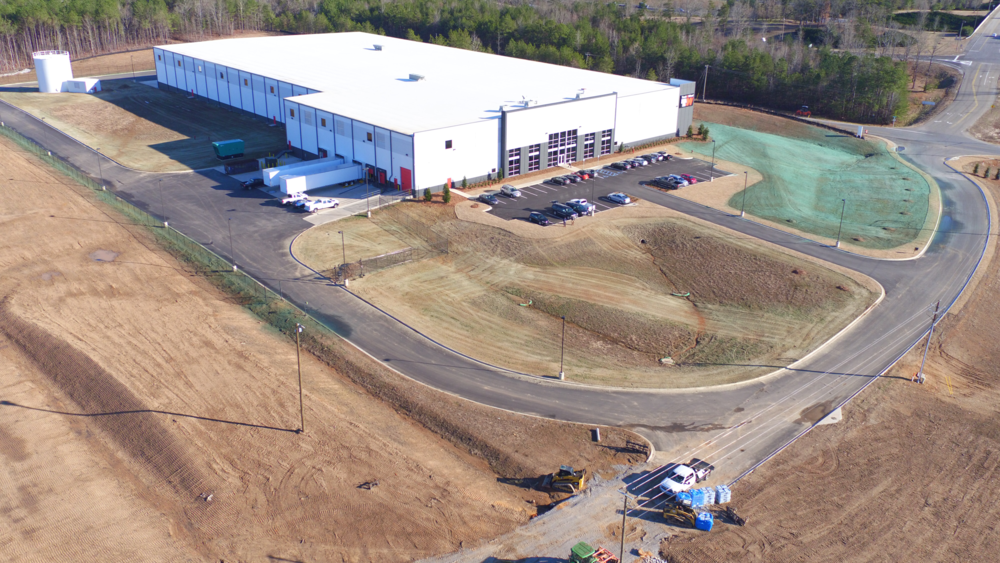 Birmingham Dots the ‘i’ in Industrial Commercial Real Estate

Within the industrial sector, 2017 showed continued improvement over the previous year. “It wouldn’t be a stretch to label 2017 as a “landlord’s market,” said Cushman and Wakefield’s Adam Eason.

The numbers back the anecdotal evidence.

In 2017, over 500,000 square feet of multi-tenant space was absorbed, the highest amount of annual absorption in the past ten years. Single tenant, freestanding, industrial buildings performed equally well, absorbing 2.5 million square feet, raising occupancy levels to a stable 95.5 percent occupancy according to Graham and Company’s 2017 Report.

“Approximately 146,000 square feet was absorbed in the central submarket. Keep in mind this submarket is the most constricted for new construction due to limitation of developable sites. This barrier to entry helps existing owners maintain strong occupancy levels with the ability to push rents. Birmingham Food Terminal re-tenanted almost 70 percent of the space that was vacated in 2016. Additionally, new leases at the Continental Gin significantly contributed to the turn-around of this submarket during the past year. As supply in the submarket tightened, rental rates for bulk warehouse space continued to increase. Overall, the central  submarket’s supply has been balanced with occupancy levels. The office warehouse sector’s supply has been especially tight with 95 percent of the space occupied,” said Sonny Culp, senior vice president of Graham and Company. 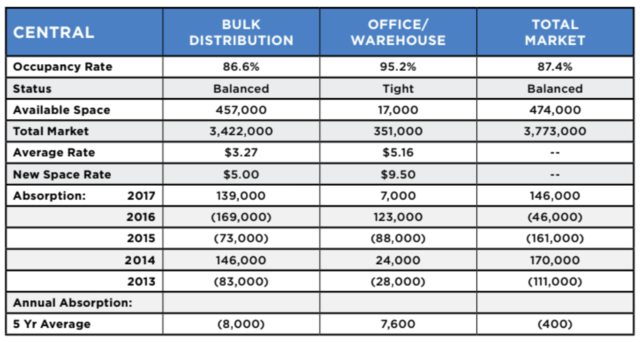 “Occupancy levels for bulk distribution space decreased slightly, but remained at a healthy 96.7 percent. There were no large blocks of space leased or vacated in this submarket last year. Rental rates for both sectors experienced a slight increase and this trend should continue.  A new project in this area will be delivered in the second quarter bringing about 78,000 square feet of spec space. The timing of this new delivery should be well received,” said Culp. 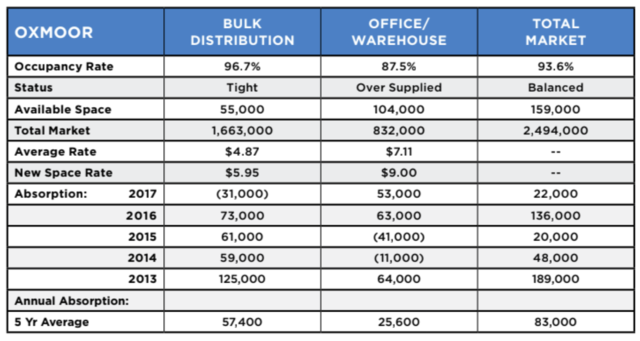 “In total, 332,000 square feet of space in large blocks was leased during the year. A 127,000-square-foot built-to-suit project for Truck & Wheel Group was recently completed in Vance, and Gestamp just finished a 260,000-square-foot building in the Jeff Met Industrial Park to accommodate growing operations. Both companies are automotive suppliers serving Mercedes-Benz. While nearing completion of a 1.3 million-square-foot body shop expansion at their plant in Vance, Mercedes-Benz made several big announcements in the second half of 2017. Plans are in development for a one million-square-foot battery plant, on a site that will be in close proximity to the main plant,” said Culp.

The new battery plant is expected to be operational by 2020. Mercedes also announced plans to build a new 700,000-square-foot aftermarket-parts hub and a one million-square-foot global logistics center in Bibb County with estimated completion dates of 2020 and 2019 respectively. Graham & Company developed the Truck & Wheel project and has 75 acres adjacent that they hope to capture for future supplier type projects. 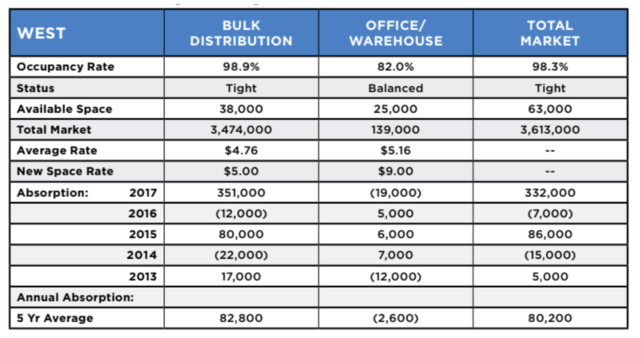 “Bulk distribution space remained close to fully occupied, and 66,000 square feet of office warehouse space was absorbed during 2017. Overall, the submarket is 95.6 percent occupied, and absorption changes were all attributed to smaller sized tenants leasing and vacating space. Rental rates have remained relatively flat since 2016, and supply in the market remains tight, especially in the bulk distribution sector. We expect continued stability with rents to rise in Birmingham’s largest submarket for the foreseeable future,” said Culp. 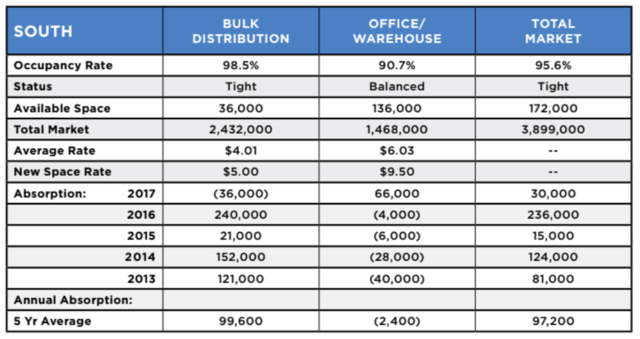 The eastern submarket was the only submarket to post negative absorption in 2017. With that being said, the market only lost a net of 4,000 square feet total and still managed to maintain healthy occupancy of 98 percent.

“Rental rates remained relatively flat, and supply was tight across all types of industrial properties in the east submarket. Additionally, a 52,000-square-foot build-to-suit project for Gardner Denver Nash was recently completed in Moody. Despite the negative absorption in 2017, this submarket continued to perform well partly due to site constriction,” said Culp. 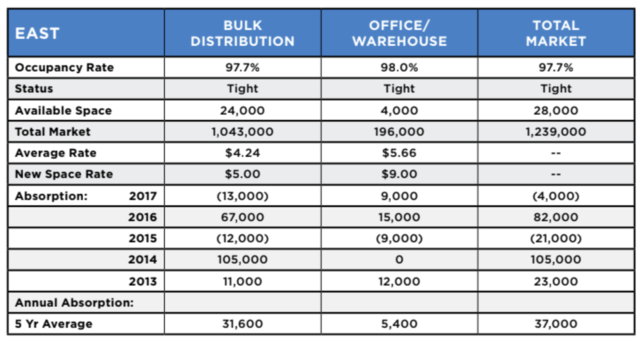 “I’ll be the first to admit that the strong leasing activity in the Birmingham industrial market during 2017 caught me by surprise.  I tend to think of Birmingham as historically having a ‘muddle through’ economy; one that never really experiences drastic swings in supply or demand, just a steady march in an ultimately positive direction.  While available spaces of decent quality usually do not remain vacant for very long, the landlord’s prospect list has never really seemed very deep,” said Eason.

Eason accredits slow (albeit steady) economic growth and a shallow tenant pool as the primary reasons why the market went nearly an entire decade (2008-2017) with no speculative industrial developments.

In higher-growth markets, 90+ percent occupancy rates like the ones EGS’s portfolio is currently experiencing would trigger a wave of new construction.  Instead, their strategy has been one of significant re-investment to ensure that their current properties remain among the most desirable within their respective submarkets.

As an example, the visual improvements to EGS’s Avondale property have led them to 99 percent occupancy (up from 65 percent) and a more than 60 percent increase in rental rates compared to where they were just three years ago.

“The strategy going forward is to position your assets with long lease terms and growing rents. In this way the next down cycle or storm might be completely avoided. Some tenants see this as an opportunity to “go long” and gain more favorable terms with leases expiring in the teeth of a strong market. If this strategy does not work and a notable vacancy shows up in your building, now is a good time to try and re-tenant that space with strong occupancies,” said Culp.

Culp also expects to chase more build to suits in 2018. Graham and Company has land positions in Vance, Moody and Shelby County and could see some “spillover” spec space if a portion of a new building were to be pre-leased.

“That said, I don’t expect to see 100 percent spec in 2018. Site constraints, rising constructions costs, and lack of new deal activity all contribute to a cautionary tact for pure spec. Furthermore, there is some considerable vacancy expected in the market in Q4 of 2020 as Mercedes consolidates three overflow leased spaces totaling about 650,000 square feet in three separate buildings to Bibb County,” said Culp.

“Overall, we think that 2018 will show steady improvements in occupancy levels, but we are doubtful that there will be many core multi-tenant asset sales of any significance given that we are at the top of the market value-wise and are facing a rising interest rate environment as well.  We are very encouraged by the steps Birmingham’s new leadership is taking to improve the appearance of the city and its reinvestments in certain neighborhoods may create new opportunity,” said Eason.