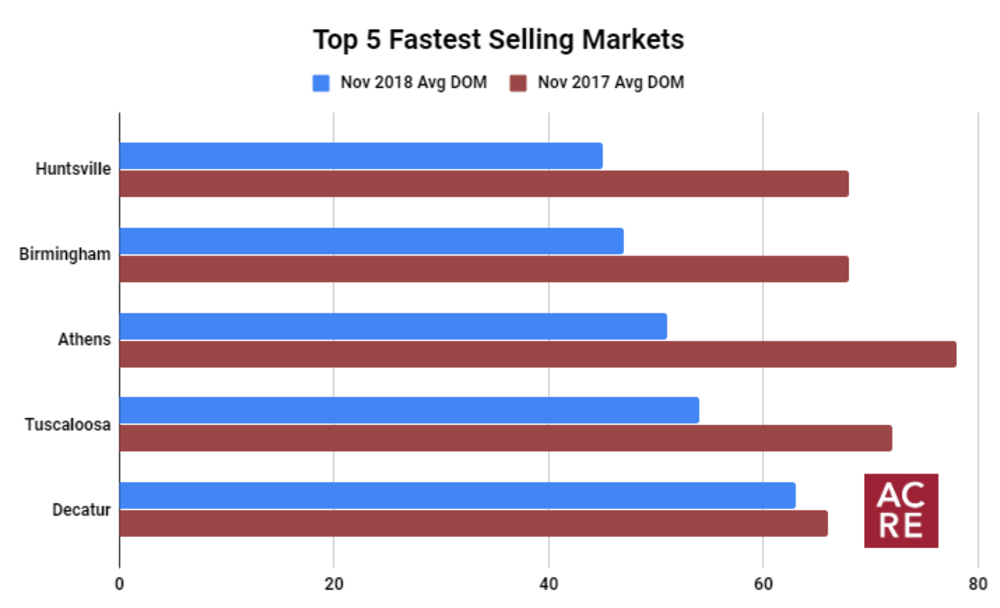 The Alabama Center for Real Estate created the following rankings based on average days on market (DOM) for closed transactions during November.

Huntsville - With a DOM average of 45 days, Huntsville was Alabama’s fastest selling market. Properties selling in November closed 5 days faster than the previous month, while the area’s year-to-date (YTD) average dropped from 75 to 58, an improvement of 17 days, or 23.7 percent from 2017. While significant year-over-year inventory declines of 20-25 percent are the new normal for the Huntsville metro area, demand remains strong as YTD sales are up 10.4 percent from one year ago. As a result, median sales price is up 8.5 percent YTD, almost double the state average of 4.7 percent

Birmingham - Residential properties in the Birmingham metro area continue to sell fast as the DOM average has stayed below 50 days for seven consecutive months. Birmingham’s DOM average increased one day from October. Year-to-date, the DOM average improved 12 days from 64 one year ago to 52 currently, the lowest in the state. Mirroring statewide trends, residential listings in the Birmingham metro area are down 11.2 percent from 2017. However, sales are up 6.2 percent YTD in spite of low inventory levels, a trend that is seen in a majority of Alabama markets.

Athens - We’re going back to the north Alabama region for the state’s third fastest selling market. Residential properties selling in November averaged 51 days on the market, 6 days faster than the previous month. Year-to-date, the DOM average improved 29 days from 90 one year ago to 61 currently. Similar to Huntsville, year-to-date sales remain strong in spite of low inventory. Sales are up 10.1 percent YTD, while inventory declines average 20-25 percent from last year.

Tuscaloosa - Residential properties selling in November averaged 54 days on the market, an improvement of 8 days from the prior month. Year-to-date, the DOM average for the Tuscaloosa metro area is down 10 days from 73 one year ago to 63 currently. The market is different, however, because inventory shortages are not as severe as other markets in the state. November listings were down 4.7 percent from one year ago, significantly lower than the statewide decline of 8.8 percent.

Decatur - Residential properties selling in November averaged 63 days on the market, up from 57 days during the prior month. Year-to-date, the DOM average for the Decatur metro area is down 19 days from 97 one year ago to 78 currently. Similar to Huntsville, inventory shortages are a major factor in market conditions. Sales continue to grow (up 12.7 percent YTD) in spite of extremely low inventory in the area. Listings are down 31.5 percent year-over-year, more than any other metro area in the state. Home price appreciation continues to trend upwards, up 12.9 percent YTD from 2017. Decatur will be a market to watch in 2019 as price appreciation is likely to continue, but to a less degree.